Back To Latest News

The job of an imaging detector is to register a single particle or a cloud of particles, read the time and position of them and store the relevant information in a computer so that it can be analysed.  However, a single particle does not provide a strong enough signal for detection. Therefore microchannel plates (MCPs) are used for amplification. MCPs together with an anode and an electronic readout arrangement form the basis of a particle detector. The principle behind a 3D imaging detector and how one is constructed is described below.

MCP is a specially fabricated plate that amplifies an electron signal. It is basically an array of single channel electron multipliers—meaning one electron will enter the channel but many will exit. Each channel is coated with a high-resistance semiconductor which serves as a secondary electron multiplier. Channels are electrically connected in parallel by metal electrodes on the opposite faces of the plate for high voltage operation in ultra-high vacuum conditions. A single incident particle (ion, electron, photon etc.) enters a channel and collides with the channel wall. As a result 2-3 electrons are emitted. These electrons are accelerated down the channel by a positive bias voltage and travel along in parabolic trajectories until they strike the channel surface and produce more secondary electrons. This cascade process, repeated many times along the channel, finally produces a pulse of as many as 106 electrons, which emerges from the rear of the plate onto the anode. The anode then produces a proportional electrical current which can be measured.

The assembly of a 3D particle imaging detector starts with the body of the detector which holds the MCPs.  The anode is welded onto the body. At this point, it is important to test the instrument to see if it’s air tight.  We test this by pumping Helium into the instrument and monitor leaks, if any. Once the anode is attached, wires to supply the MCP in, MCP out, and anode need to be soldered onto the body.

The function of the anode is to code the incoming charges in such a way that it is possible to estimate the position of the original particle that was released the charge pulse. In order to do this, the anode has a specific structure. 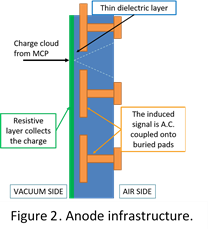 One side of the anode has a resistive layer that collects the Electron cloud as it comes out of the MCPs. The buried pads which are located inside the anode induce a positive signal responding to the electrons. Because the charge is “induced” and not directly collected the positional information does not rely on the physical attributes of the pads and the particle’s position needs to be reconstructed by the electronics, which will be discussed later.

Once the body of the 3D particle imaging detector is welded onto the flange and tested for leaks once more, the microchannel plates can be added. This arrangement comprises two chevron-stack 10 µm pore MCPs. These MCPs enable a gain of ~5 x 106 electrons.

Figure 4 shows an expanded  view of the detector components. MCPs are producing a gain of ~106 electrons which are collected by a resistive anode, that serves to localise the charge while the current induced on the readout electrodes is measured with the front-end electronics. 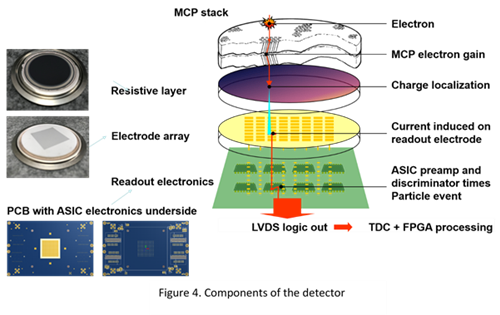 Front end electronics consist of 4 x 64-channel charge sensitive ASICs (Application Specific Integrated Chip) which produce data, including the time and position of the particle, and send it to a computer  via a Field Programmable Gate Array (FPGA) readout for analysis.

The anode and the PCB, which hold the ASICs, are clamped together via a spring and valve arrangement. The corresponding PCB array on the other side has 16 x 16 pads, meaning there are 256 separate anodes/channels/pads for particles to be recorded.  Once the rest of the components are mounted the detector is ready to be used. 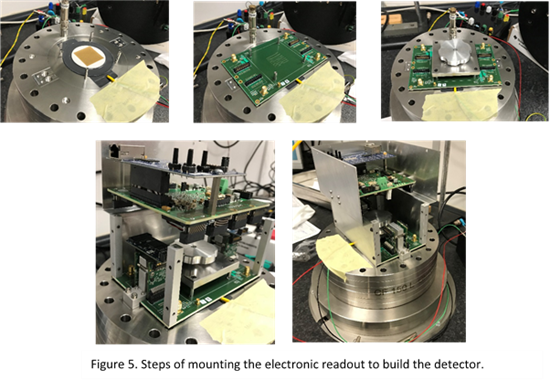